“I didn’t relocate,” she reminded me. “I was displaced.”

This is what Stacy said after I asked her what it was like relocating from New Orleans.

I had not immediately made the distinction. The former suggested that there was a choice. The latter, however, suggested no such choice. She was put out of place, and in this case, it was her home.

She was from New Orleans, born and raised, and had lived in Texas and North Carolina before settling in Northern Virginia after Hurricane Katrina. I was participating in Housing Advocacy Day and enjoyed the opportunity to connect with folks on the topic of housing. Hearing this and attempting to continue the conversation, I responded by asking more about her life after the 2005 hurricane. She was happy to share, and happy to correct me when I misspoke. After talking to her, I understood why my words had stung.
I did not know that several weeks later I’d be following news coverage of a global pandemic and watching how local governments responded to the health crisis. As I did, I thought back to the conversation I’d had with this woman about displacement.

When we look around at the changes happening in our neighborhoods, many of us like to think that they are a natural occurrence – that the choice to move is based purely on a desire to experience or plant roots somewhere new. While this is the privilege that some of us have, we must keep in mind that moving is not always based on choice, sometimes it is forced upon us by circumstances far out of an individual’s control.

City of Richmond
Over the past decade, the City of Richmond has undergone significant change. When I talk to my mom who grew up just 30 minutes south of the City, she often reminds me that it was once a place she avoided due to its reputation for being crime infested. That has since changed, and Richmond is re-branding itself into something quite different, but many question at what and whose expense?
Between 2010 and 2017, the City’s demographics experienced a shift. While the City remains predominantly African-American, a closer look at these changes reveals that predominantly African-American census tracts have become whiter over the years. In some tracts, the black population has decreased by more than 15 percent. In one tract, this has resulted in this group representing a smaller share of the population in comparison to whites. 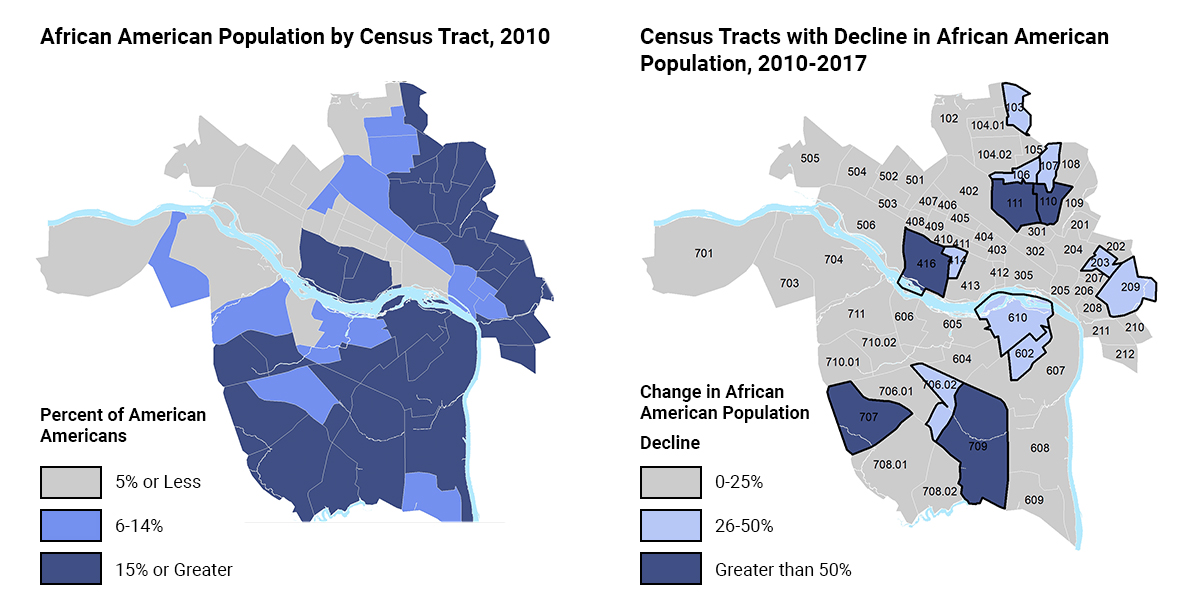 According to City Lab, during post-Katrina Black residents were significantly less likely to have returned to New Orleans in the first year than non-blacks were, at 44 versus 67 percent (2015). While the changes in Richmond are subtle, they touch on issues we must consider when trying to address large scale displacement. Understanding the type of environment in which it occurs and the policies that must be in place to ensure that people can stay, or in the case of Katrina, return to their home is crucial to decreasing the impact of gentrification and increasing access to housing.

The local government’s response to the COVID-19 outbreak should force us all to think more critically about displacement and the fallacy that its occurrence is intrinsic to any neighborhood. In fact, I would argue that it is quite the opposite to a large extent. It is during a crisis like this where efforts must be made to help people remain in their homes. It is during a crisis like this where the roots must be firmly planted to ensure that the local government is not complicit in creating an environment that propels displacement. Policies like those that halt eviction are certainly about making sure families can remain safely and stably housed today, but they are also about ensuring that present conditions do not lead to the very patterns that intensify the displacement of communities of color. The reality is that if we don’t work to make sure families can remain in their homes during this crisis, there is no guarantee they will be able to return once it ends.