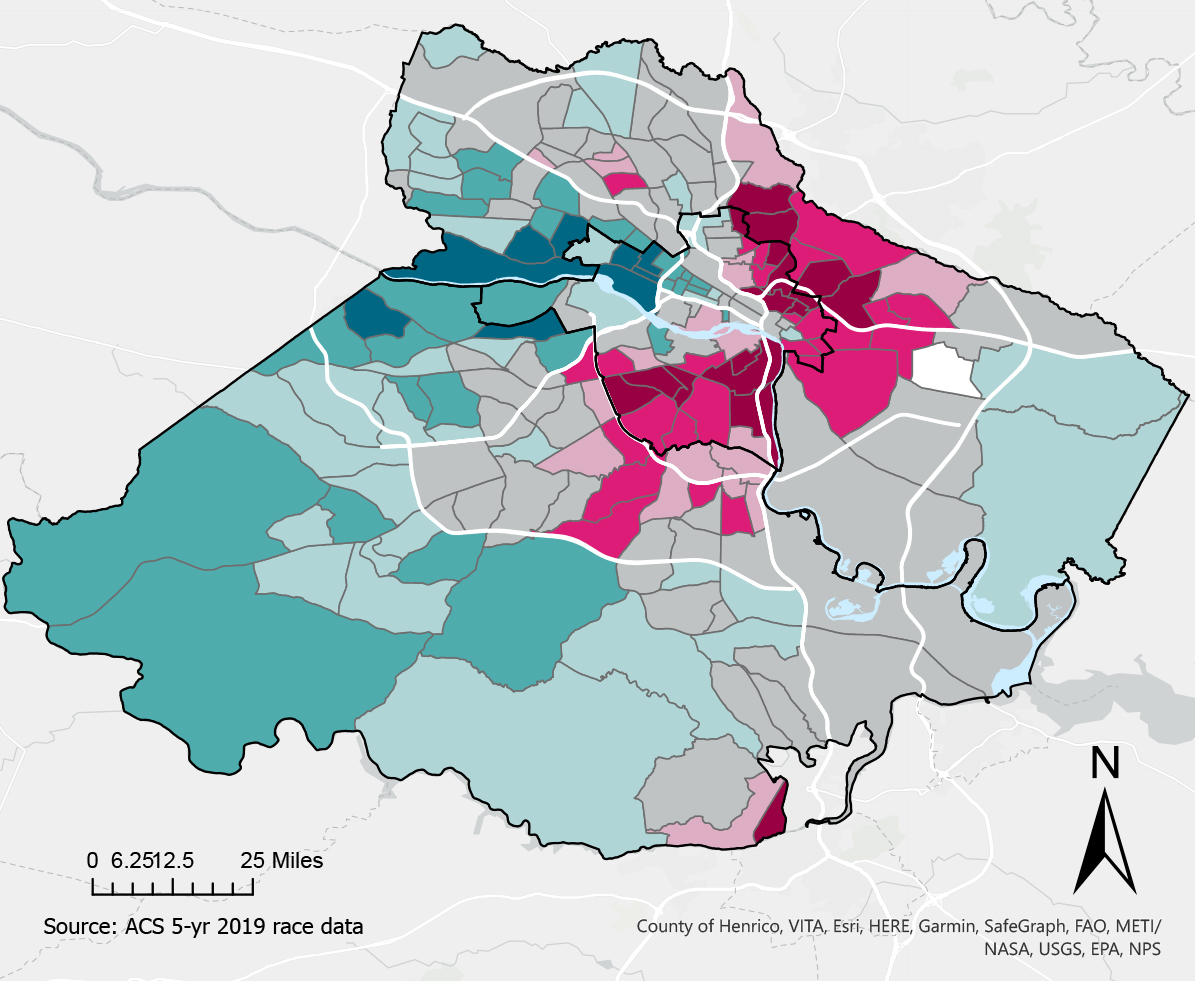 In 2019, the Richmond City Metro Area (including Richmond City, Chesterfield, and Henrico Counties) had a total population of 914,056 residents. About 32% identified as Black or African American (this number includes both Hispanic and Non-Hispanic ethnicities but excludes those of multiple races). 53% identified as White Non-Hispanic (this number also excludes those of multiple races). In order to demonstrate the level of residential segregation, the percentage of White and Black residents in each census tract was calculated and compared to the racial composition of the whole metro area. The Disproportionality Percentages demonstrate the degree to which each census tract differs from the metro area. For example, a tract that is “50% disproportionately White” has 50% more White residents than it would if the tract matched the metro area’s ratio of White to Black residents.

Residential segregation is not the result of African-American self-segregation, in fact, data indicates that Black home-seekers would prefer to live in diverse neighborhoods but barriers prevent them from doing so. Residential segregation developed through explicit racially discriminatory public policies and private practices. These include explicit city ordinances requiring segregation, the legal permissibility of discrimination, government recognition of racially restricted covenants, racially segregated public housing sites located in neighborhoods with corresponding racial demographics, and redlining by the federal government which became the basis for discriminatory lending and insurance practices by government and private agencies. This combined with white resident’s resistance of integration, blockbusting, intimidation, and outright violence towards Black neighbors, created the foundation for the racially segregated communities that we still see today.

Segregation in housing is so harmful because where one lives impacts every facet of their life, and if housing choice is limited based on area, then their opportunities for school, employment, healthcare, childcare, and transportation are all limited to what is available in that area. And what we are seeing is that socioeconomic opportunities tend to be concentrated in predominantly white neighborhoods.

It is important to note that these disparities are NOT caused by race. Predominantly Black neighborhoods are NOT worse off BECAUSE they are predominantly Black, rather, many of the most significant services, amenities, and opportunities in our society are place-based. Residential segregation allows this place-based allocation of resources to map racial injustice onto neighborhood geographies while amplifying those injustices through isolation. What Dr. Andre Perry and associates call “Place-Based Discrimination” in a recent report about Richmond by the Brookings Institute.